History of the Silverliners 1954-Present 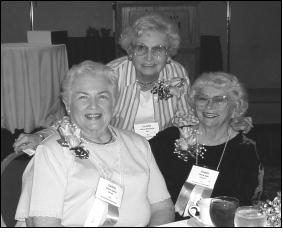 Over 65 years ago, three remarkable women—Carol Montell Harlin, Doris Coughlin Self and Claire Ward Westhafer met in New York to talk about their "flying days."  Word was sent out and at a meeting late in 1954, former Eastern Air Lines flight attendants met who were interested in retaining old and gaining new friendships and raising monies for charitable purposes.  The meeting resulted in the establishment of one of the most unusual organizations in the world – The Silverliners.

By 1968, the four independent chapters came together to become the National Silverliners. The meeting of the New York, New Jersey, Miami and Atlanta chapters was held in Atlanta, GA. In 1974, twenty years from that first meeting, the Mexico chapter was added and we became the International Silverliners. At this same time, we welcomed current flight attendants into our membership.

Over the years, we established an International Charity Fund, The Hole In The Wall Gang Camp. Through this commitment, we raised over $100,000 for the camp, funding a new cabin plus needed resources for other purchases. Over the years, chapters and individual members have helped raise thousands of dollars for their chapter charities and spent thousands of hours helping others by working as volunteers while enjoying each other’s company at chapter meetings, International Board Meetings and International Conventions.

In 2019, we celebrated our 65th anniversary - 65 years of fundraising, fun and friendship.  We “rebranded” ourselves as “Silverliners International – founded by Eastern Air Lines Flight Attendants” and welcomed all former and current flight attendants from all airlines to join.  We now boast members from over 50 airlines.  Our thanks to Eastern Air Lines, our Founders, and all current and past members proudly represented in Silverliners.

May the future hold recognition of a job well done as well as an acknowledgement that time has not altered intention. We salute the chapters and individuals who continue to excel in community, friendship and the enthusiasm to continue the tradition started in 1954.

If you are a former or current flight attendant and you'd like to join us as we continue to enjoy the comradery, give back to our communities and relive our years as a Flight Attendant, please send us an email request to [email protected] or through the website Contact Us.